I’m just going to yank a World War out of my ass…World War 2. All wars are started for the same retarded reason…greed. Is there any other reason to start a war? I doubt people (cowardly “world leaders”) get pissed at each other that much that they would want to kill one another. Come to find out, I’m right! “World leaders give the appearance they want the other dead, but in secret, they are opposing bed fellows eager to work together to make a profit. I’m telling you, the private sector ain’t got sh*t on high-level politicians.

World Wars Started From Greed and Power Too! 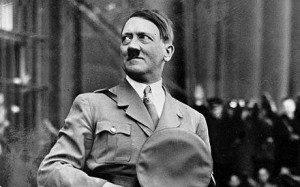 World War 2 started because of Germany’s unyielding thirst for power over Eastern Europe, led by the former punching bag turned super bully, Adolf Hitler. Hitler arbitrarily occupied Austria (Arnold Schwarzenegger’s home country) and Czechoslovakia without much resistance, but needed an excuse to invade Poland. Well, let’s just skip to the end…Hitler dressed a concentration camp prisoner as a Pollack and shot him at the German border to give justification for invading Poland. On September 1, 1939, Hitler invaded Poland in what he called “Blitzkrieg” or lightening war. This forced France and Great Britain to declare war on Germany.

Now I don’t blame the gangster nations coming to the aid of Poland, who got blind-sided by a German jerkoff. Nonetheless, all of this could have been avoided had it not been for Hitler wanting more of what everyone else had. He’s like the little evil kid in the sandbox who wants all the toys even though he can only play with one at a time. That little dick! Well, university presidents and administrators are pulling the same sh*t on students. Asking for more and more until we have no options after college but to take a job, any job that will pay back our student loans. Dam that’s depressing.

It never made since to me: the education doesn’t get any better, the books are the same, the buildings are paid for, the faculty number hasn’t increased, yet the price tag on college tuition “skyrockets” every year exponentially. So how are students paying for it? Free government traps…ummmm…I mean loans. Your collegiate leaders are more greedy and conniving than Hitler ever was, and care just as much about your feelings. If you think about the similarities, we are being put into a slave camp (I didn’t say concentration camp out of respect) that will last a lifetime.

What chaps my ass even more is most of us will force our kids down the same path we were forced down in the name of IGNORANCE!