“One life is all we have and we live it as we believe in living it. But to sacrifice what you are and to live without belief, that is a fate more terrible than dying.” This is a famous quote from Joan of Arc. This is a very elegant way of saying let no time in our lives be wasted by living it to the fullest. Not only that, but if you hide your true self and believe in nothing, death would be more appealing than living without purpose.

Tied To The Burning Stake Of Education 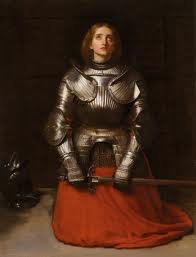 I’m sorry I had to get so deep on you this morning, but it seems young people are taking the path to college under false pretenses and fear tactics, refusing to see what is waiting later in life. Joan of Arc was burned at the stake for heresy, going against the beliefs and policies that prevailed at the time. Stating your beliefs aloud, especially when they conflicted with the rules of the land, was grounds for execution.

Today, students have a crippling, silent panic instilled and refuse to follow their own path for worry of the harsh criticisms that may come if they were to oppose the status quo. These students could have been excellent soldiers of Rome, following orders given by the emperor, and giving their precious lives when commanded. However, these same students would have been outcast, even killed in the early 1400’s (the time of Joan of Arc).  You see, lack of a spine only aids one in a large, unfeeling regime. In rebellions, it could cost the entire causes it’s life.

My unease results from students being scared to tell the King and Queen (Mom and Dad) what they really want. If you have the balls or “coochie” lips to stand up to your parents and TELL THEM what you really want to do with your life, then take an example from a young lady who led armies in her teens and do it! Joan of Arc was burned at the stake at age 19 for believing something contradictory to the governance in her time. She said with unyielding courage, “Hold the cross high so I can see it through the flames.” Now THAT’S belief!

Think of what this spirited, talented, and death-gifted teen did for her beliefs…and we can’t tell Mom and Dad we want to be a musician?! Life is way too short to stand quiet in the corner of your own life. Joan dies at 19 years old. Some of us will die at that same age, only we’ll die 2 deaths. One when we sign on the dotted line of student loan debt only to find out the life we want can never be had working for a boss. The other when we’ve reached the physical end of our days realizing we hung our passion in the closet for 50 years with the tag still on it instead of wearing it everyday with boastful pride, letting the world see what we love.