Before the Jesus freaks get all hot under the collar (or Christian robe, if you prefer), I’m not saying believing in God is corrupt. I’m saying what we call religion IS corrupt. If you fail to see the difference, then read on. Religion is the organized routine of worshipping one’s God(s) utilizing ritualistic ceremonies as forms of symbolism which usually condemns defectors of a particular faith while rewarding those who praise, follow, and give money to the faith. When people believe in something with such blind allegiance, that something becomes powerful and this could be a really awesome thing. Often though, it’s just misused by religious leaders to separate people and start wars. 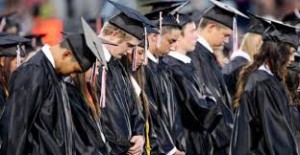 Colleges now have the same kind of power usually reserved for Catholic churches. People have been rigidly trained to follow the doctrines of society (you must go to college to have any type of success) just like religion brings people up believing there is an imaginary man in the sky who follows every aspect of our lives and appears to have a nasty violent streak.

I believe in anything that brings real positivity to anyone’s life and if that’s believing in God, then I’m all for that. You see, it doesn’t matter if the next person believes or not. The only fact that remains is YOUR perception of the world around you. No one else’s thoughts or feelings are significant. I can’t really tell a college-bound student not to go to college. It’s just my opinion. If that young man or woman feels that there life will be made better by attending a self-a facing, self-righteous, even pious, destroyer of young lives, I say go for it. It’s your life after all.

I will say this, God doesn’t need your money (tithing) and universities don’t need your entry fee (tuition). The two monetary values are one in the same. They offer you access to what’s behind the big, crested gate. Behind the door of religion is salvation, provided you were a good little follower and jumped through all the hoops. Similarly, behind the door of education is permission to get a job along with guaranteed debt, provided you’ve got the credit score to back it up.

Maybe it’s just me, but something just doesn’t feel right about all this. Most churches aren’t even honest enough to tell you what they are going to use the tithe offerings for, they’d just prefer you “give till it hurts”. I could respect a man who says, “We are collecting money to put together a youth program for our children” or “We plan on building a new addition to the church to accommodate Sunday school”. I don’t think anyone, religious or not, would mind giving in this scenario, but “Give until it hurts”? Go f*ck yourself.

Colleges now have the nerve to pull the same sh*t on us. Their line is, “We don’t want everyone coming here, just the ones that really want it”, which is code for “those who can afford it”. Some colleges even go so far as to say, “We only want the good students”.  Well, what makes a student good? Grades, attitude, skin color, religious background? What? The point is both religion and college “bank” on you believing they are the doorway to the life (or afterlife) you want.

Instead of begging on bloodied hands and knees to get through the gateways proposed by religion or education, why not build my own gateway to walk through on my own two feet.