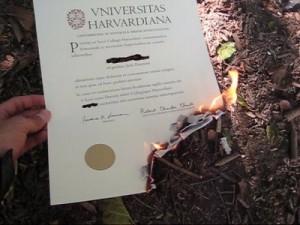 Any degree we received from a college or university is the equivalent of toilet paper. You could say they are meant for the same purpose. When I go out to enjoy my breakfast (or any meal of my day), I hear people moaning and complaining about their jobs. Just yesterday, I heard a woman declare that her son was GOING TO COLLEGE.  She said this emphatically.

Yet right after that, she started chiming about how she would never work a job if she didn’t have to. Yes dear, none of us would. That’s the point. As if going to college guarantees you a position or some minimum level of success. Get f***ing real!

What you see in the picture to your left is exact what you should do with your diploma…BURN IT! I know you’re proud that you worked your way through the system, put in long nights of studying, and lived in depressive squalor for 4 years in the hopes you would land that exciting new job.

You thought this process would deliver a promise of a great future…large houses, exotic sports cars, and money to burn. WRONG! We were pushed through this process to make us better slaves. They’d like us less apt to step off the assembly line. Nevertheless, as Emiliano Zapata said, “I’d rather die on my feet, than live on my knees”.

Don’t listen to me if this goes against your undeterred believe that school classrooms are the key to success in life. I can’t blame you. After all, we’ve all been in the system for years on end being mind-f*cked with the same trash. Here’s some other material for you to view if you don’t believe me saying it. Following is a CNN Money article run this year about students who were interviewed after getting a Masters Degree and having tried to find a job in the market today. I was blown by what some of the graduates said…

“My Master’s Wasn’t Worth It!“

Did you read that?! Most of the people who possess Master’s degrees are working at entry level jobs (really menial labor) while they are saddled with upwards of $120,000 in debt! Let me ask you this, how long will it take to pay of this debt working at McDonald’s, a gas station, or a car wash? I’ll tell you…over 50 years which puts you into retirement. Wow! You should be running for your college’s front door right now. I’m not asking you, I’m telling you to pack your sh**, go to the registrar to stop your loan, and get the hell out of there…TODAY!

There is a media-propelled myth out there that says, “A college degree is the minimum you need to ‘get by’ in today’s world”. Stop letting people jerk you off with no lube. Read the MODERN publications like Wired, Inc., or Success magazine and you’ll find that no one is worried about your education or how many awards we have.

They want to know, are we coachable? Can we be trained in their system? What new ideas we can bring to the forefront? If you haven’t noticed already, anything you are doing on your job RIGHT NOW, is 98% irrelevant to what we learned in our college/high school classroom. It’s a waste of time, money,and life. Get out!

Watch “The Matrix”! Its symbolism is strikingly similar to our controlling, bureaucratic system. It’s just formatted in a more entertaining fashion. It’s extremely difficult to go your own way when you see all your friends sucked up in the same mess you’re in. It’s almost impossible when you have your parents pushing you to do well in this stationary system.

Let’s turn the table. Your parents / loved ones are pushing you to get what they have…then just a little, tiny bit more. That’s it. Is that what you want? If not, start following, learning from, and being mentored by people who have what you want. If Dad doesn’t have the Bentley, love him, but firmly state this is not the path you want for your life. You only get one. Your parents WANT what’s best for you, but they don’t KNOW what’s best for you. You do! Fix it…NOW!

When you see excessive amounts of students drop out of school at all levels, this is not a sign the system isn’t working. It’s a glaring fact that kids, teens, and young adults know that theory often does not apply in the real world. So our new generations are not afraid to test the limits of what they can do.

Whereas as my generation followed blindly, not asking questions, but numbly taking orders. Now, our next generation has the huevos to stand up and say, “traditional education is not the way for me”, we are upset and stunned they are doing so poorly in school. There’s a difference between not WANTING to do it and not be ABLE to do it.

Another “proof” story for what you are headed for: “Duke Student Lives In Van To Avoid College Debt“

Ending, don’t forget this: Harvard, Princeton, Yale, Wharton, and any other ivy league schools you can name can’t hold a candle to the high school dropouts of the world! Do your research. You’ll find that mega-success doesn’t need a degree at all.

You can get an education anywhere…and it can be had for free!