I know the title of this post may sound a little strange to most of you. Then again, some of us may have missed the joke. You don’t “make love” to a ho, they get f*cked. Students, just like their gigolo counterparts, are bending over just as easily as a stripper at a ghetto titty bar. In many cases, hoes have pimps. Well, colleges are more than happy to slap your ass across the face and ask, “Where the f*ck is my money?” 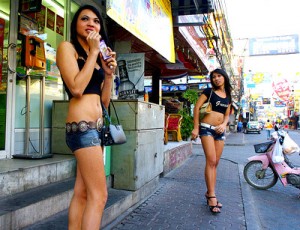 Most of us believe prostitutes have all the diseases listed in the STD clinic pamphlet, are nasty, unsanitary tramps who wash up at public sinks, and make a good amount of money going after unsuspecting housewives’ husbands. Do these judgments sound about right? They should…they’re true! LOL Students also allow themselves to be used (“whored out”) by their collegiate pimps, with one glaring difference: hoes get PAID to give up the cookies whereas college students are handed a bill. So you get pimped, charged, and f*cked? Talk about “education for dummies”.

Students going to college have this grand illusion going that they are in a functional relationship with their college or university. The reality is students are nothing more than “tricks” falling for the fantasy of riches and wealth that supposedly come with a college degree. Poor bastards. The students will be riddled with academic STD’s (Severe Traumatic Debts) similar to the fate of a “street John” who goes raw with a “street walker” and ends up with the “herps”.

In case we weren’t aware, herpes will remain in your system (active or dormant) for the rest of your life. Guess what, so will college debt. The condom for students in this situation is to get a free education via scholarships, connections, and student financial aid. If you insist on going the traditional route, at least get as much as you can monetarily to reduce your financial burden.

If you are more an apprentice of abstinence (staying away from the pimp game…uuuummmm…I mean colleges), then I’d champion outside-college-learning from a real world mentor (highly recommended), or taking real-world seminars where knowledge to make money can be attained in as little as a week. With a couple months of study, you could be an expert in a field only costing us $10,000 and a few months instead of $100,000+ and 4 to 8 years. The latter is not even a consideration.

I’d love to tell you sleeping with hoes is safe and that you’ll never have any problems as a result, but I’d be boldly lying to your face. STD’s (sexual or academic) will always come back like an Aussie boomerang to bite you in the ass. Sexually, it’s your spouse, boyfriend, or girlfriend who gets the bad news when they schedule their annual check-up. Academically, it’s Mom and Dad who are infected with our boatload of debt. Don’t do it. The grass is not greener on the other side of the contagion…AKA the graduation stage!