I’ve got to hand to him, Hitchcock was a creative motherf*cker! If you’ve ever seen “Alfred Hitchcock Presents…”, then you’ve been left out of a pretty good portion of cinematic history. If you care to catch up on his musings, the show still airs 6 days a week at 9pm Pacific time. I can’t give channels because they vary depending on your market and location. The man is a genius and I see why the television networks of his day were fighting over the chance to make his next episode, which ultimately led to the world-famous blockbuster, “Psycho”.

Lessons From The Creative Mind Of Alfred Hitchcock 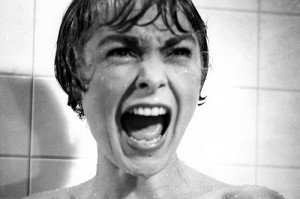 If you’ve ever seen the ‘shower scene’ from “Pyscho”, then you know it’s one of the most famous pieces of film ever captured for the sake of a movie. The funny thing about this cut from the reel is that it avoids showing any of the murderous details of  Norman Bates slashing Marion Crane. Yet, this scene has more cache than most films that blatantly showed the bloody violence, even today. This kind of cinematography could only come from a supremely creative mind.

We have to awaken our stuck, docile, idol minds to what can be, then turn those thoughts into motion. This will begin a set of falling dominoes in our lives designed to bring the kind of riches and lifestyle we desire. The ideas we hold in our heads have to inspire others to an action that will make us wealthy. It can be one idea or several, but one thing is for sure…it must be creative, like the late, great Hitchcock.

“Hitch” fought the networks to make this now epic film, sold everything he had, risked his marriage to his long-time wife, and mortgaged the house he lived in in hopes that “Psycho” would be a success. As you can now tell, it was! While making this cold, calculating masterpiece, Alfred would not compromise his vision because he knew exactly what would work and how the audience would react. He even stood outside the doors of his premiere to gauge if the audience would jump at certain points in his showing, or screams when he predicted they would. They did!

Knowing your audience is a skill, one we need to cultivate for our own success in this thing we call life. Don’t die with your music still left inside you. James Altucher always has a saying, “We need to exercise our idea muscle”. He’s referring to our power to come up with fantastic ideas on a daily basis simply by coming up with great ideas on a daily basis. You see, the more we use our brains to fabricate thoughts to help ourselves or others, the easier it is to construct these concepts.