Today is the day for sexin’ my woman, suckin’ down some tasty, sweet watermelon, and tender, falling-off-the-bone ribs with lots of BBQ sauce. Oh wait, those are the only things worth going to college for! LOL, I have to tell you though, I wouldn’t pay sixteen grand a year to do it. Especially when it can be done for nada. I just put on some clothes to write a quick post because I knew, even on a holiday, I’d have to keep on you all about staying away from those money-grubbing a**holes at your colleges and universities.

In the spirit of the 4th, I’m going to give you the greatest gift. One that Lincoln gave the beaten, confined slaves. Something George Bush ripped away from the people of Iraq after his hunt for those WMDs. Something every cell bound prisoner in the entire world longs for. Something a battered wife preys for in the darkest corner of her home…FREEDOM!

By enrolling in college, you are placing yourself in the same situation as the tormented captives mentioned above. The only difference between us and them is WE HAVE A CHOICE. Would you willingly lay down in front of a 2000 lb vehicle if you knew it would roll over your neck? Would you walk into a hood in Compton, CA saying how much money you had on you? Lastly, would you stand behind a paper target at the shooting range? Hopefully, you said, “F*** NO!” to all of the a fore mentioned questions.

These questions all have one thing in common: they will all end or ruin our lives. College will do the same.  We don’t think so because it’s not as abrupt as snapping your cervical vertebrae under the crushing weight of a car’s front wheel, but the effect is the same. If you get good grades, and graduate from these “institutions of higher learning”, there is no guarantee of anything. Not even a job. Ask the poor grads (literally poor) whom have gone before you. They know what’s out there…nothing. 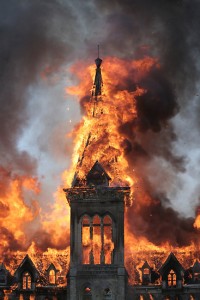 Oh, don’t mistake my intent. We can get a job, make money, and buy stuff. Hear me well, that’s all part of our slow death. The other trappings of this sneer are built into the vernacular of our family’s words. They spout seemingly innocent, but deadly words to keep us in the system like, “You get a raise every year you work a job”, “You’re going to have a huge retirement after working for 40 years”, “You’re lucky, you get 2 whole weeks of vacation”, “You have to have benefits, just in case…”, “Women respect guys who have a steady job, a nice place, and a decent car”.

Are you hearing this sh**? Then you are on death row right now. Do I hate college? YES! It’s a racket built of liars under the cover of “trying to better us”. It won’t. Everything we learn after paying our $50,000+ can be learned without paying the $50,000. Don’t fail to see the point, this is a mind-control regiment being implemented on us at the baser level.

Free yourself of the path we are being forced to follow. I know I sound like a member of “The Resistance”, as well I should. I’m still fighting to escape MYSELF! Thirty years of mind-f***ing is a lot to break free of, but I’ve done it on every front except with money. This blog is helping me to cope with the latter right now. Start the process of getting out. Start your own business, join an MLM, start direct mail marketing, find out how to run FaceBook ads, learn SEO optimization for your web site, or fill-out that stripper application you have at the bottom of your junk drawer. Do something, but NOT a job. Move from behind the paper target. For most, it doesn’t end well.

Speaking of freeing myself, my girl wants to see me naked. (Seconds later…)

See you in a couple days.