I’ve finally been able to get back to you SINFM loyalists and post some thoughts about some pretty stark realities in the school system today, which is why we shouldn’t be part of it in the first place. Before I start…yes, parents are still giving their kids old, out-dated harmful information like “stay in school”. There is still no shortage of desperate academic prisons willing to rob us of our parents’ hard-earned money. Lastly, my girlfriend still hasn’t said “no” to sex in a year and a half (dam I’m lucky). Having stated the facts, I’ll jump subjects here since I’ve made my point. I had no idea “bullying” went on at COLLEGE campuses. 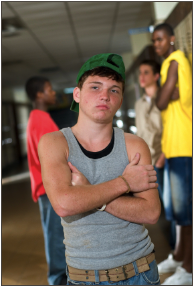 Obviously, bullying hasn’t gone anywhere. So why is it I thought it had somehow gone away? I was bullied in grade school pretty badly, and had awful thoughts about what I could do to severely maim the guys who were messing with me. I even wanted to take my Dad’s gun to school just so people would stop. I just wanted it to stop! So I know what it feels like to have feelings of dread to go to school, feelings that no one is going through this, even feelings of wanting to kill myself (not really knowing what that meant).

I guess I’ve repressed those horrid feelings in order to keep my sanity. Unlike some of these bullied kids today, I had a “saving grace”. I used to help some of the more aggressive, bigger athletes with their home work. So one day in school when I was just fed up and sick of being put down, I walked around the school with my head down waiting for someone to mess with me. I had finally got up the courage to do something. Yes…me! The A-student was ready to throw down, the guy who had never gotten into a fight in his life.

Well, the inevitable happened, I forcefully bumped into a big, tall, dark-skinned school-bully who had been picking on most of my friends. After this fated brush, he said “Why don’t you watch where the f*ck you’re going!” Mind you, we were in 5th grade. Such language. LOL Anyway, I stood ready for him to hit me, then I could do whatever I wanted to him under the assurance that he started it. He appeared ready to hall off and knock me out (which he probably would have), but just as he was about to take a swing, Greg stepped in super-quick!

Greg became one of my best friends through me helping him with his homework. He was good at everything athletic. He was so muscular, I didn’t even think he should be in grade school. Later I found he was held back (luckily for me). Now, when Greg stepped in, he shoved the bully in the chest so hard he bounced off the fence immediately behind him, then Big Greg stuck him in the stomach one good time. The bully (I never knew his name) was coughing for 15 minutes after that punch. All I could think from then on was I’d better never make Greg mad at me!

After most of the kids at the school witnessed this awesome spectacle, I was never tangled with again. Greg and his friends were all protectors of mine, and I couldn’t have been more grateful. I do realize, though, most bullied children don’t have a “Big Greg” to take up for them. I was lucky.

It’s as if, somehow, these over-sized, dumb, bastard kids found a ‘Back To The Future” DVD and thought it was an excellent idea to use Biff Tannen as a role-model. I do know that it’s the parents’ fault for the bully’s behavior. They get bullied, so they bully. It’s that simple. Some of these little miscreants even take orders from their “sicko parents” to inflict torture on innocent kids who are just trying to get through another day in school. Bullying is an epidemic worse than the flu. It spreads through the young population like E. Coli among rats. Yet, we aren’t animals. We’re human beings.

Needless to say, humans should be more accommodating and empathetic to other humans. If we hate what someone has done to us, why would we then go do the same thing to someone else? It’s not right, and it has to stop.

If we are being bullied, it will never stop until we decide to do something about it. If we keep leaving our door unlocked, criminals will keep robbing us. If we keep leaving our face open, bullies will keep hitting us. Win or lose…we MUST fight! Bullies don’t keep messing with kids who leave black eyes, scratches, and bruises on them. Bullies might mess with us once, but if we tear out some hair, give them a fat lip, or give them a gut shot (stomach punch) they’ll never forget, I guarantee, they’ll move on to a target that’s less feisty. Trust me! If it doesn’t work the first time, do again until the bully gets nervous about messing with you.