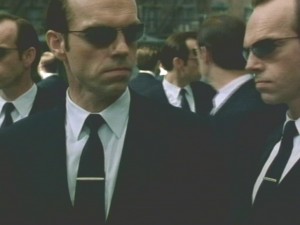 Just like Agent Smith was part of “the system” in my favorite sci-fi movie of all-time, ‘The Matrix’, there are nameless, faceless drones that roam the streets surrounding our schools looking for us. WTF? If I don’t want to attend school, I can go wherever the f*** I want. Well nowadays, maybe we don’t have that freedom.

Public schools don’t cost any money because the state supplies them with money to run the school. However, it’s not a flat rate that the school gets. Our public schools are paid according to the number of student heads our school counts in the classroom. The administrators make it seem as though they care about you “getting a good education” so that you’ll be able to “make it in life”. It’s all bullsh**! They get a set amount of money for every student they “confine” to a classroom. In my high school’s case, it was $10,179 per student per year. Illinois received a grade of “F” in money for value received. (Below)

As you can see, our performance on the standardized tests we take every year have no benefit to us. Those tests are more servitude training for later in life when we have to fill out those TPS reports (testing procedure specification). The plan here is clear: Make the students do so much work they don’t realize what’s really going on.

The school system is purposely keeping students inside the school because of the money that comes along with your attendance! Even if you get no value from the high school (IE You sleeping in class), your school still get their “cut” from the state. What a f***ing racket. We may as well be chips on a table in a Las Vegas casino because that’s how our administrators are playing the game with us.

To ensure the attendance of it’s money…I mean students, our high school has hired out legally justified thugs to round up students and bring them back to school, called truancy officers. Yes, our high schools have their own private police department! These agents of the system are paid from state money brought in by our schools. The massive amounts of cash brought into the school districts via state funding is staggering, thus, paying a bunch of goons to run around after us if we stray from our “education” is nothing.

They have the authority (from the state) to pick up our kids and take them back to school…EVEN IF THEY ARE NOT SUPPOSED TO BE AT SCHOOL THAT DAY! I can’t speak for you, but I want my kid to be able to go anywhere he’d like to without being stopped, harassed, and shuttled back to a make-shift prison for conforming his mind into that of a follower. If you step out of line, they are (literally) there to put you back on it.

The unmarked white cars ride down a street near you, looking tediously throughout the city for a human under the age of 18 to “take down” and bring back to school. Some school districts even give out a bonus for confining our children. It’s disgusting! The moment they spot one of our offspring, they bare down on them like a cop on a “perp”. The “walkie” is full of chatter saying they’ve “got one”, now all teams are responding to our kids. They are treated like criminals. Questioned, harassed, shamed, and conveyed back to the warden of the prison…I mean high school. I mean principal of the high school.

Excuse the f*** out of me, but are we living in 19th century Germany or what?! If my kid doesn’t think school is for him, and he wants to do something better with his life, that’s what I want. I do not, I REPEAT, do not want a child of mine forced through a course of study that will condemn his creative spirit, train him to be passive, or start to convince him that this education system is worth fighting for. It’s not. If my mini-me is engaging in risky behavior, I’ll be there to straighten it out. I  really don’t need the state all up in mine. 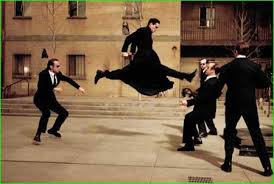 Do you know who’s patrolling your kids today?